Associate Professor Craig Rodger describes his interest in tracking lightning produced radio pulses called sferics. As these pulses exit the Earth’s atmosphere and travel through the plasma surrounding the Earth, they are dispersed. On returning to Earth, the dispersed pulses, called ‘whistlers’, can be picked up by receivers and the degree of dispersion analysed to provide information about the plasma sphere.

CRAIG RODGER
I’m really interested in the radio waves that come off the lightning. Most of those radio waves are trapped between the charged part of the atmosphere – the ionosphere – and the ground, and that’s why, when we put up our 60 or so radio receivers around the world, we can detect the lightning because most of the radio wave is trapped.

But a small fraction of that radio wave escapes though the ionosphere into space that surrounds the Earth, and it propagates through the space. And as it propagates, it’s changed. It travels along the magnetic field of the Earth back down to the top of the atmosphere in the southern hemisphere where it spreads out. So if you have a radio receiver in the northern hemisphere, you hear [sound effect]. If you have a radio receiver in the southern hemisphere, you hear what happens to that click after it’s travelled through the plasma that surrounds the Earth [sound effect].

Now the phenomena that occurs when it travels through that plasma is called dispersion. In this case, the high frequencies travel fast, and the low frequencies travel slow. So you start off with, click, all the frequencies are lined up together. By the time it’s travelled for 1 second or so through the plasma surrounding the Earth to get to the ground in the southern hemisphere, instead of being a click, you get [sound effect].

The high frequencies arrive first, the low frequencies arrive slower and slower. It goes from being a sferic to being a whistler, because it sounds like a whistling tone, and the speed at which the whistler goes [makes sound effect] from high to low tells you about the plasma that surrounds the Earth. So if we want to study the plasma that surrounds the Earth, we could do it by throwing a space craft up there, and that’s really doable but very expensive, or we could put up a radio wave receiver here in Dunedin, wait until there is lightning somewhere in the northern hemisphere and study for almost free what’s happening in the space around the Earth.

And of course you want to know about what’s happening in the space around the Earth, particularly the plasma environment around the Earth. Primarily you want to do that because that’s where our technological infrastructure is – that’s where all the satellites are. Whether they’re the communication satellites or the weather imaging satellites or the GPS network or just, at the inner edge, the International Space Station with a crew that’s sitting in there – they’re living in a plasma environment. And understanding that plasma environment tells us about how those satellites will live and, possibly, eventually how they will die. And given it’s very expensive to put something up there, we would really like to know what the environment it’s living in is like. 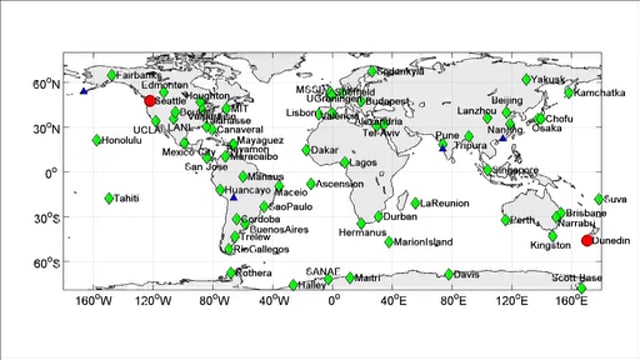