In this video, Dr Eric Scharpf, an energy management specialist, explains the physics meaning of the term ‘heat’, which differs from the general usage of this term. He then defines the term ‘latent heat’ and gives examples of its everyday use in household devices such as heat pumps and refrigerators.

Latent heat is the amount of energy needed to evaporate, condense, solidify or melt something. It’s where you really need to put in a large amount of energy to change the relationship of the different atoms and molecules. So if they’re all packed together quite tightly in rigid spaces in a solid, you need to add a bit of energy to break them apart a little bit so they can slosh around against each other, and that’s a liquid form. And then you need to add actually quite a large amount of additional energy to break them apart even further from a liquid into a gas for instance.

And that energy needed to break those interactions is called latent because it means it’s inherently a part of the different arrangements of the molecules.

With latent heat, because there’s a large amount of energy moving around at a single temperature, we can use that in a vast number of ways. We can use it to cool things off. In fact, sweat is a latent heat cooling system. Our sweat is in the liquid form, and it takes a heck of a lot of energy to evaporate. That comes from us and cools us off.

So we naturally use those things, but we can also play little games with them by designing machines or systems that move energy around in different ways. So that you can park a very large amount of energy by evaporating something, you keep putting energy into the liquid and into the liquid and it turns into gas. So there’s a whole large amount of energy in that gas, and then you can get it back by condensing that gas.

You can take a large amount of energy and get it out of a vapour phase and leave it in the condensed form. And then you’ll have to put energy back later if you want to switch it back again. So it’s kind of a cycle, and that idea of a cycle is how, for instance, everything from a heat pump, a refrigerator, a steam turbine engine and so forth takes energy and then moves it around with a little input of work or mechanical energy.

So latent heat – that energy parking – in a big cycle or circular arrangement can move energy out of refrigerated stuff to make it cold. It can also move energy into stuff to keep houses warm in the winter and things like that.

Footage of athletes courtesy of Run On! 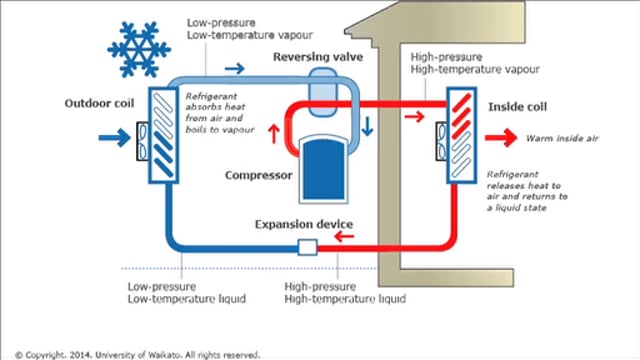 Converting states of matter from one form into another requires the involvement of heat energy. For example, converting water at 100°C into steam at 100°C requires the input of 2260 kJ per kg of ...